In my most recent visit with my Psychologist, she told me she wanted me to try and unify Cadence with my male alter ego. I had spent years telling myself I had  done that very thing. However, apparently I had done just the opposite.
In a way, I was a one person variation on the theme of the movie, Twins with Arnold Schwartzennegger and Danny Devito. I had somehow relegated all the positive aspects of who I am, and invested them in Cadence, while my male alter ego was left with mostly the negatives.
I conned myself into thinking that Miss Girlfriend was getting a mix of things from me, because of Caden; that there was a distinctly defined feminine benefit to Caden existing as a part of me. That may have been partially true, but I still held things back; reserved them exclusivy for the enjoyment and use of Cadence.

All the while getting frustrated when anyone referred to Cadence in the third person; as if I was suffering a split personality or identity. But truth is; I sort of was. I had self-imposed that division on myself.

I felt like there had to be distinct differences between Cadence and my male identity. In some small ways, yes; by all means. But not in the greater scope of things. There should not be a definitive reason for Cadence to be happy and enjoy a positive life experience at the expense of my male side suffering for her enjoyment of that luxury. My male ID should be able to enjoy the same level of confidence I am able to enjoy and maintain as Cadence.
I’ve surmised that I tended to divide and repress elements of who I am out of fear of discovery. Miss Girlfriend once told me that on the occasion of our first dinner date, she noted that my hand gestures almost had a feminine quality to them. I suppose little things like that were enough to make me self conscious enough to seek a division between my feminine thoughts, feelings, needs and desires and my masculine alter-ego.

So for a few days after that visit with my psychologist, I was perplexed on how to set about accomplishing my Doctor’s request. Then I had a stroke of genius; so what Cadence would do in a given situation, and if all else fails, simply ask myself, 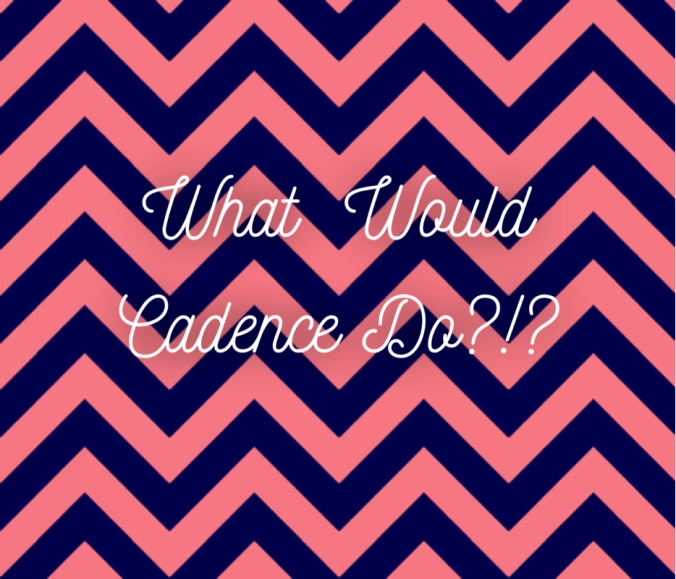 While simply walking, I made sure to walk as though I was wearing heels, I made sure to elevate my chin and smile pleasantly. I made sure to be extra polite and friendly. When in conversation, I was sure to be engaging and fun. People around me immediately took note. They commented on the new and improved me they were seeing and enjoying. It was immediately apparent to me that I had managed to severely cheat both myself and those around me who do not know Cadence exists within their lives. They had no way to know I was siphoning the best qualities of me away from myself and them to build and feed Cadence. Cadence, someone who on a good week only gets to physically exist for maybe eight hours a week. Which isn’t entirely true; I, me; I am Cadence. Whatever I express physically, I am the totality of the two visual aspects I demonstrate. The key element is the heart, mind and soul of me the individual, which brings life to the two visages that those around me get to see.

By living as a unified individual, they still know Cadence, no matter how I may present. Those who know of only Cadence also know my male side. There may be subtle nuances to how I express my feminine side versus my male side, but they are just that; subtle nuances, not key elements.

I was initially worried that undertaking this endeavor would somehow take away from my time as Cadence; that it would somehow take light away from what I experience as Cadence. The truth is; it was freeing. My time as Cadence was more fulfilling, more enjoyable. I had slightly less angst about “putting Caden back in the box,” but I still found myself wishing it did not have to happen; that I could live some slightly larger part of my life as Caden. When I have not been expressing myself as Cadence, I’ve found that I wish to be her even more. I’m not sure what the relation is there; but I’m glad it was not the contrary that I had been worried about, where I would want or need less time as Caden. But it has certainly made my time as my male side more fulfilling.

6 thoughts on “What would Cadence do?!?”

Experiencing gender transition as a family while sharing our knowledge to help others.

I Solemnly Swear I Am Up To No Good

The blog of Pamela Schloesser Canepa....reflections on writing, family, dogs, learning, books, and almost everything from mundane to weird.

~Plucking Of My Heartstrings~

A [trans]formed existence through fresh lenses.

The Semi-Relevant Ramblings of a Woman in Progress

A blog on my transgenderness, how it intertwines in both my life and my love

Tips and advice on finding a happier lifestyle through self-love and mental healthcare, with a side of fashion and makeup.

MY FLR AND FORCED-FEMINISATION LIFESTYLE

A Walk In The Park
Just Stimming...

A land we can share (a place I can map)

A leading voice in the LGBTQ and Christian dialogue

the road is life

Thoughts on being transgender

A place to be your beautiful self

This blog is about whatever is currently taking my fancy.

The musings of a cross-dresser

|| Break the barriers and Make a difference ||

Confessions of a transgender mall rat

An MTF transgender lady; her wife, their pugs, cats and everything life throws at them

I was told writing would be helpful.

A Dutchie getting fit!

Being girly and feminine....is my heaven!

A Life In Transition